WASHINGTON, DC—(5/3/21)–For two decades, the United Brotherhood of Carpenters has attempted to raid work traditionally performed by members of many of the thirteen building trades unions that make up the North America’s Building Trades Unions (NABTU), including Roofers and Waterproofers.

The carpenters’ usual tactics include spreading misinformation and raiding the work jurisdiction of hard-working men and women of other crafts. They have made baseless claims that building trades unions are not able to supply necessary manpower on projects, and that the carpenters will supply their members to contractors in order to perform work such as roofing, vapor and air barriers, spray foam, solar installation and more.

More recently, a disturbing development has arisen in Indiana. The carpenters announced an invitation to contractors from various crafts to attend a demonstration of the carpenters’ ability to train and provide workers to perform building trades work. This event took place April 28 and 29, 2021, at the carpenters’ Merrillville, IN, training center.
The leadership of the United Union of Roofers, Waterproofers & Allied Workers prepared a plan of action to actively protest this event, asking for support from other building trades unions from Indiana, Illinois, Missouri and Ohio.

The result was a tremendous showing of solidarity from our local unions throughout the Midwest, as well as some of our sister building trades unions in Indiana. About 300 protestors turned up each day to line the street with signs and inflatable rats. Dozens of rank-and-file members took time off work to join Roofers & Waterproofers leadership to let the public know that the carpenters are not playing fair. Carpenters are paid lower wages than the skilled craftsmen and women whose jurisdiction they are encroaching. If union contractors believe they can pay lower wages for carpenters to do the same work, the devastating result is loss of work for our members, and lower wages for ALL skilled tradespeople.

Raiding and encroachment into another union’s jurisdiction is never appropriate and totally unacceptable for any trade unionist. All union craftspersons have a right to make a living and support their families. We must stand together in solidarity to protect the rights of all union men and women working in the construction industry. 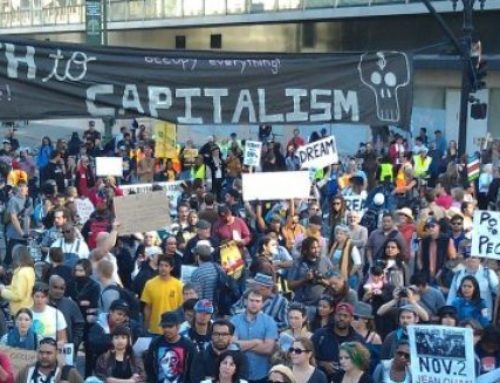